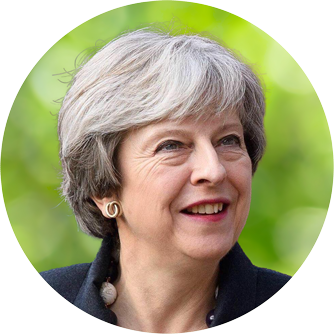 Theresa May served as Prime Minister of the United Kingdom and Leader of the Conservative Party from 2016 to 2019. She was appointed Chair of the Aldersgate Group in July 2021.

During her time in Downing Street, Theresa introduced legislation to end the UK’s contribution to global warming entirely – making the UK the first G7 country to legislate for net zero emissions. She also oversaw the publication of the Clean Growth Strategy and the decision to end unabated coal-fired electricity generation in the UK by 2025, both of which are helping accelerate emission cuts and driving the growth of renewable generation. On the environment, she launched a 25-year Environment Plan which provided an ambitious framework to protect and enhance the UK’s natural environment within a generation.

Since standing down as Prime Minister, Theresa has remained an active MP and speaks regularly in the House of Commons on a range of local, national, and international issues. She works with over 20 charitable organisations and campaigns on issues she helped address during her time in office.